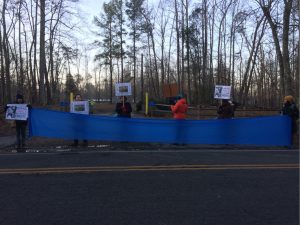 Their action spotlights one of the many reasons that, according to organizers, Dominion should not be allowed to build the compressor station, which would be a key pinch point between Pennsylvanian fracking fields and what is becoming a sprawling network of fracked gas infrastructure in Southern Maryland, including the Cove Point export terminal and several power plants.

By beginning work on the project without final approval, “Dominion is thumbing its nose at Charles County’s Board of Appeals, which has not yet ruled on Dominion Energy’s application for a zoning special exception to build a compressor station on the Dominion Cove Point Pipeline,” said Kelly Canavan of Accokeek and president of the AMP Creeks Council. Community members who organized the action point out that the next Charles County Board of Appeals hearing is on March 13, and that local and state processes should be allowed to unfold before irreparable harm is done to the forest on Barry’s Hill Road by premature.

Although the Federal Energy Regulatory Commission (FERC) has granted a Certificate of Public Convenience and Necessity for the “Charles Station” project, at least two levels of permission remain to be secured. For example, the FERC approval cannot override the Maryland Department of the Environment (MDE), should MDE decide to deny the air quality permit for the project. Moreover, MDE cannot deny or grant the permit if the Charles County Board of Appeals rules against Dominion’s zoning special-exception application. That determination will not be made until the Board of Appeals hearing on March 13. MDE will hold its own public hearing to take oral and written testimony from the public on March 28 at the Bryans Road Volunteer Fire Department at 6:30pm.

Throughout the process, the neighboring community has overwhelmingly expressed outrage at the danger that a fracked gas compressor station would bring to the region. The fear of what could happen if a catastrophic event occurred has been brushed aside by Dominion, but residents remain worried. Opponents of the project have packed six Board of Appeals hearings so far. Protestants are being represented by counsel at the local, state, and federal levels, and have filed a Motion for Rehearing and to Reopen the Record with the FERC.

Opponents point out that the proposed compressor station presents multiple hazards. If emergency responders needed to access the site after a heavy rain, snow, or wind storm, it might be impossible to reach because of flooding, downed trees, or deep snow. Already in 2018 the road has flooded more than once, and trees and power lines have gone down near Dominion’s driveway.

Additionally, while local first responders have the community’s deep respect, fighting fires is extremely difficult in rural areas without sources of water. Responders are not equipped to fight a fire of the magnitude that might occur at the compressor station if it is built.

Residents are also worried about air pollution and the loss of a way of life they have treasured if this large-scale industrial project is allowed to proceed. “I have lived here for my entire life, and cherish this area more than any place on earth. But if that compressor station is built, I will be forced to move to protect my family rather than see them slowly poisoned or rapidly incinerated. Dominion should not be able to get a special exception that destroys everything I love here. They should not be able to take my community and home,” said Canavan.

The proposed “Charles Station” would push gas to the Dominion Cove Point export terminal, new Washington Gas and Light taps, and the embattled Mattawoman Energy Center power plant proposed for Brandywine (although that project is currently listed as “suspended”). Over the last five years, several new gas-fueled power plants have opened in Southern Maryland, and the export terminal is just beginning to come online. This seems to run counter to Maryalnders’ opposition to 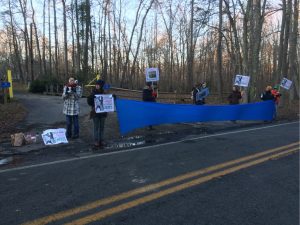 fracking. The gas that would run through Charles Station would not come from Maryland, but it would significantly increase fracking in Pennsylvania. “The cumulative impact of this build-out on climate change and human and environmental health will be severe,” Deborah Buelow of Accokeek said.

No Royal Farms in Accokeek

A huge Royal Farms gas station and convenience store are proposed for the corner...

On behalf of AMP Creeks and our co-opponents in this case. MDECommentsFinal MDE comments...

Dominion wants to “dewater” about an acre and a half of land above the...

The AMP Creeks Council and We Are Cove Point invite you to a very...

UPDATE:  Thank you to everyone who called, wrote, and testified. We were heard loud...

No Royal Farms in Accokeek

A huge Royal Farms gas station and convenience store are proposed for the corner...

On behalf of AMP Creeks and our co-opponents in this case. MDECommentsFinal MDE comments...

Dominion wants to “dewater” about an acre and a half of land above the...

The AMP Creeks Council and We Are Cove Point invite you to a very...